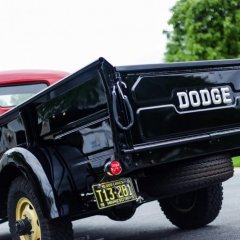 Well, for better or worse, TODD has a full floor.   Some spots just downright gave me fits so I ended up chasing welds.  Knowing I'm going to grind a radius on the outside of the frame notch, I bridge

Top all hammered and dollied.  Sides formed and tacked in.  Now the stich tacks and in process dolly work to complete!

No problem....nothing to worry about