Need some pics of original type interiors for 46-48 DeSoto

Thanks Ratbailey for those pics.  And you are going to do what i would have asked you to do.  Take some pics of the headliner and package shelf!  Thanks!  I think that A, B, C. D, and E above show som

Bryan,  thanks for that pic of your interior.  Dodge is very similar to DeSoto.  Do you have picture of the package shelf under the rear window.  What is it made of?  I think the leatherette is a tan 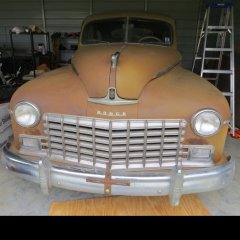 Here they are. under the back glass is different than at the seat and door bottoms.  Back glass area seems the same as on the sides under the dash.