Me and the Meadowbrook 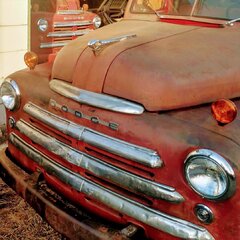 Hey fellas got my car running again (it was a faulty fuel pump) and I wanted to start a new thread and leave my engine rebuild thread as something separate.  In this thread I'm going to post pics of m

6-3: Me, my son, and my oldest daughter went on about a 2 hour cruise tonight.  Just around town.  Beautiful weather!  Windows down, cowl vent open.  Lots of stares, waves, and thumbs up.  We sto